We used to offer jobseekers one pair of eyes…sometimes a few pairs of eyes…but now the whole world has their eyes open.

Two meetings this afternoon have really energised me and got me thinking, yet shown me how network and community are increasingly doing the job of 3rd party recruiters.

Is this the dawn of Community Recruiting? It’s free for the hirer. It’s part of the ‘Big Society’

Firstly, I had a great catch up with Marianne Cantwell today. Twitter followers will know her as Free Range Humans, career change coach and corporate life escapologist. Soon she’ll be Free Ranging in the USA!

She was very excited; she had found a business card on a bus which was part of a Facebook campaign by a Graphic Designer called Mark Winter to find a new job. He was offering 10% of his first month’s salary to whoever helped him: 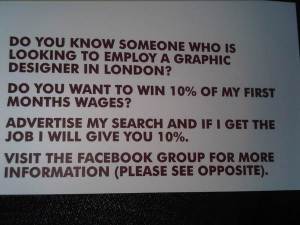 Marianne had photographed the card and tweeted it out. Within minutes it was being retweeted by her network. She showed it to me and I started tweeting it out…and then decided to blog about it.

Within 5 minutes the reach of his campaign was growing fast. Who knows how many other people have seen this campaign and communicated it…from his modest number of followers many thousands are being exposed to his work.

Thousands of pairs of eyes.

After meeting with Marianne I caught up with an old candidate who was coming to the end of a long contract with a major global brand. It’s been really good for her, especially as it came following a redundancy and prolonged period of job searching. She knows a lot of recruiters. Did any of us find her this lucrative contract, which has given her a great development opportunity and a brilliant name on her CV? No. It was through a friend who has nothing to do with recruitment or HR, but who knows someone, who knows someone, who…you get the picture. Now I appreciate that this kind of referral recruitment has long been around, but it has now been given added impetus and strength by connectivity, network and a real sense of wanting to help.

Time was that people would job search in private. Certainly using friends, friends of friends and family to spread the message is something more recent.

Friends and family, network and community.

Then I fire up the laptop this morning and start by reading Day 13 of the #MyJobHunt daily blog series from Gary Franklin. I don’t know if you’re following this series, but you should. All 3rd party and inhouse recruiters, and anyone involved in the hiring process should.

He talks about a role that was passed to him. He mentions the company name and the role. It’s  not a role for him, but in his capacity as founder of the Forum for Inhouse Recruitment Managers he is able to inform relevant candidates, passive and active, of this role.

I’ve been thinking about where recruitment goes next. Whilst some niches, sectors and locations may find its business as usual I think that there are clearly many challenges ahead for the majority. Social recruiting and direct sourcing are just two, but not the only two.

So it could be time for a change on this blog. I feel myself in more philosophical or reflective mood, keen to blog and debate about some of the key challenges that I see and to get your input.

It’s time for the dinosaur to evolve and move on! T Recs may well remain in some form…but I think this may be time for a more agile and forward looking image!

Watch this space…and as always, let me know what you think…

4 thoughts on “The World is Your Recruiter” 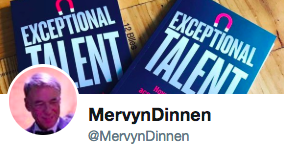